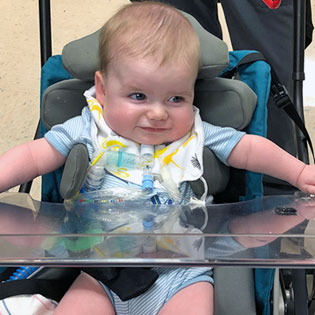 VOCSN has made the possibility of leaving the hospital a reality for our baby son, Brooks. Born in October 2018, we learned Brooks has the ultra-rare disease SMARD which is thought to affect only about 100 children worldwide. His pulmonologist wanted to discharge Brooks, but we struggled to wean Brooks off the hospital ventilator. We tried other portable ventilators with the hope of taking Brooks home, but he just would not tolerate any portable device-until VOCSN. We quickly learned how to use VOCSN and we feel very comfortable setting and using all five therapies. Having all the therapies together has been so helpful, especially since the Cough Therapy function has had such a positive impact on his recovery from a recent infection.